David Harrington of the Kronos Quartet

Moustapha and I had the chance to speak with Mr. David Harrington about the upcoming show (March 21st) at the Jorgensen Center for the Performing Arts. What a pleasure it was to have a conversation with a musician who loves waking up and facing the next project. For more than 30 years now, Kronos has pursued a singular artistic vision, combining a spirit of fearless exploration with a commitment to expanding the range and context of the string quartet. In the process, Kronos has become one of the most celebrated and influential ensembles of our time, performing thousands of concerts worldwide, releasing more than 40 recordings of extraordinary breadth and creativity, collaborating with many of the world’s most eclectic composers and performers, and commissioning hundreds of works and arrangements for string quartet. Kronos’ work has also garnered numerous awards, including a Grammy for Best Chamber Music Performance (2004) and “Musicians of the Year” (2003) from Musical America.
The show at Uconn will be SUN RINGS. Sun Rings, written by longtime Kronos collaborator Terry Riley, is an evening-length work in 10 movements. With visual design by Willie Williams, lighting design by Larry Neff and sound design by Mark Grey, Sun Rings is a multimedia production featuring a choir and both sounds and images from space. The piece, commissioned for Kronos by NASA and others, received its first performance at the University of Iowa’s Hancher Auditorium in October 2002, and has since been performed in cities including London, San Francisco, Calgary, Tucson and Boston.

Listen to the interview here. 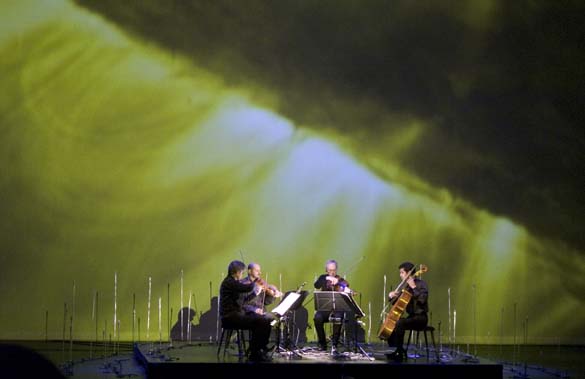