GREECE, N.Y. (AP) – Jason McElwain had done everything he was asked to do for the Greece Athena High School basketball team – keep the stats, run the clock, hand out water bottles. That all changed last week for the team manager in the final home game of the season. The 17-year-old senior, who is autistic and usually sits on the bench in a white shirt and black tie, put on a uniform and entered the game with his team way ahead. McElwain proceeded to hit six 3-point shots, finished with 20 points and was carried off the court on his teammates’ shoulders. McElwain, 5-foot-6, was considered too small to make the junior varsity, so he signed on as team manager. He took up the same role with the varsity, doing anything to stay near the sport he loves. Coach Jim Johnson was impressed with his dedication, and thought about suiting up McElwain for the home finale. His performance was jaw-dropping: 20 points in four minutes, making 6-of-10 3-point shots. The crowd went wild. 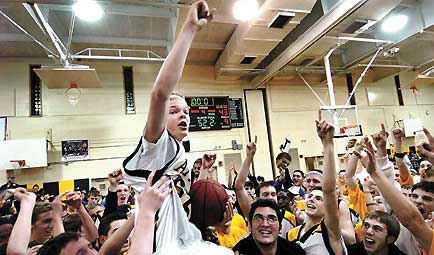 McElwain didn’t begin speaking until he was 5. He lacked social skills but things got easier as he got older. He found many friends and made his way through school in this Rochester suburb, although many of his classes were limited to a half-dozen students. And he found basketball. Even though McElwain was in uniform for the Feb. 15 game, there was no guarantee he would play – Athena was battling for a division title. The fans, however, came prepared. One section of students held up signs bearing his nickname “J-MAC” and cutouts of his face placed on Popsicle sticks. McElwain will soon be done with high school basketball, then enroll in business management this fall at Monroe Community College. “I’ll go on to college and I’ll try to hoop there,” he said. “I just love it, it’s one of the greatest sports in the world.”