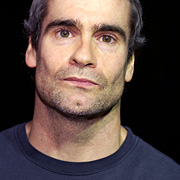 has been getting a lot of attention these days from the Australian media â€” after all, it’s not every day that some American punk icon calls Australia’s prime minister a “sissy.” Prime Minister John Howard caught Hank‘s wrath during the rocker’s most recent trip to Australia. On the flight from New Zealand, Rollins said he was reading a copy of Wall Street Journal correspondent Ahmed Rashid‘s book “Jihad: The Rise of Militant Islam in Central Asia.” The man sitting next to him took objection to the book and reported Rollins to the Australian government. Now, here comes the part where you say to yourself that stupidity isn’t ONLY running amuck in our government.
“The guy phoned me in to their, like, anti-terrorist board, and they found me â€” they looked me up,” he said. “They looked up the flight and found out who was sitting in seat 10A and they got to me. And they said, ‘OK, you’re now a person of interest. The man next to you does not agree with your politics and he didn’t like the book you were reading.’ This kind of provocation, I don’t respond very well to. I was furious. And so I wrote back, ‘You can tell everyone at your office, including your boss, to go f— themselves. This book has been read by a ton of people â€” I am not a threat to your state or any state or any republic.’ ” In the actual text of his online response, Rollins added: “Baghdad‘s safer than my hometown, and your PM is a sissy.”

–note to self, only read comic books on airliners