The Rolling Stones: A Bigger Bang

Eight years separate 2005’s A Bigger Bang, the Rolling Stones‘ 24th album of original material, from its 1997 predecessor, Bridges to Babylon, the longest stretch of time between Stones albums in history, but unlike the three-year gap between 1986’s Dirty Work and 1989’s Steel Wheels, the band never really went away. The tight, sleek, muscular band showcased there was a surprise â€” they played with a strength and swagger they hadn’t had in years â€” but a bigger surprise is that A Bigger Bang finds that reinvigorated band carrying its latter-day renaissance into the studio, turning in a sinewy, confident, satisfying album that’s the band’s best in years. I have certainly not found it easy for such praise to come off my tounge for Mick and mates in a long time. What distinguishes A Bigger Bang is that it captures the Stones simply being the Stones, playing without guest stars, not trying to have a hit, not trying to adopt the production style of the day, not doing anything but lying back and playing. But that’s what makes A Bigger Bang a big deal: it’s the Stones back in fighting form for the first time in years, and they have both the strength and the stamina to make the excellent latter-day effort everybody’s been waiting for all these years. 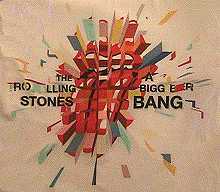