And the Winner is……

We all know that you and you are waiting to know which pooch won the Westminster Kennel Club highest honor of America’s top dog. A colored bull terrier called Rufus used his head Tuesday night at the Madison Square Garden Arena. Rufus’ selling point? His head – perfectly shaped like an egg. Rufus was the first dog in his breed to win at the nation’s most prestigious show. Handler Kathy Kirk said she was “ready to pass out” from the pressure, but her nearly 6-year-old dog that she playfully calls “Puppyhead” seemed to take it all in stride.
At a show that drew 2,622 entries in 165 breeds and varieties, Rufus really earned this victory. He beat out a favorite Norfolk terrier named Coco and a Dandie Dinmont co-owned by Bill Cosby just to reach the final ring. When it got down to Best in Show, Rufus was picked over a popular golden retriever, a Rottweiler handled by a former Florida State linebacker, a prize pug and a spirited Dalmatian. 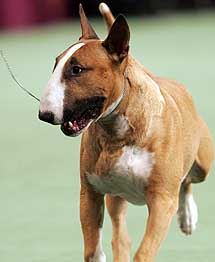